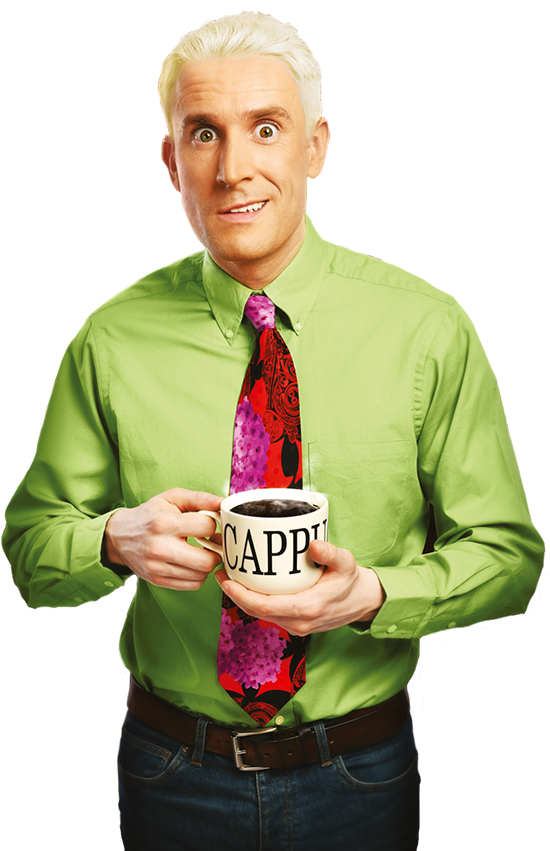 This new show from acclaimed comic actor Brendan Murphy, reimagines the TV classic through the eyes of Barista Gunther. Settle down in Gunther’s café to hear the true insider story of what happened to Ross, Rachel, Phoebe, Chandler, Monica and Joey from the F.R.I.E.N.D.S character who kept them caffeinated through all the highs, lows, love affairs and failed auditions along the way!

One man, one hour, ten seasons. The entire 236 episodes of the hit 90s TV show, F.R.I.E.N.D.S, as told through the eyes of the one person who knows it inside out… Gunther.

It’s been twenty-five years since the F.R.IE.N.D.S pilot was filmed and still it looms large as one of the most successful television shows of all time. Translated into various languages and airing in over 50 different countries, rarely has a show had such global appeal. After it arrived on Netflix on New Year’s Day 2018, it became the most-streamed show on the internet.

In a desperate plea to gain his audience's affection, character comedian Brendan Murphy has come up with a show that will appeal to literally everyone and finally get him one of those shiny awards or at very least some kind of certificate.

He gives you the entirety of the cult sitcom in an hour of life changing entertainment from your new best FRIEND.

Hysterical... a must-see for old and new fans of F.R.I.E.N.D.S.
Adelaide Advertiser

Brendan Murphy plays that blonde, awkward Gunther to a tea... or in this case to a coffee cup.
All About Entertainment
A perfect night with F.R.I.E.N.D.S.
Scottish Field
A pleasing nostalgic trip to Central Perk [from] an indefatigable comedian and improviser.
FEST See FRIEND (The One With Gunther) live in London and beyond! More dates coming soon.

Brendan is an actor, writer and comedian.

He attended drama school at Arts Ed London before going on to train in improvisation with Second City and iO alumni David Shore, and The Free Association.

He is co-founder of improvised theatre company The One Hour Plays and a member of the award-winning short-form group BattleActs! (BBC Radio 1). He has written and performed two solo comedy shows: Bagman (2015) and Enter The Bagman (2016); and regularly performs musical comedy with Kiell Smith-Bynoe as The Crooners.

Hamish MacDougall’s recent directing credits include The War Of The Worlds (New Diorama/North Wall /Tour); Willy by William Andrews (Soho/Pleasance); Hammerhead by Joseph Morpurgo (Soho/Southbank /Pleasance/Tour and winner of The Brighton Comedy Award and Pleasance Best Comedy Show 2018); Soothing Sounds For Baby by Joseph Morpurgo (Soho/Pleasance and nominated for Edinburgh Comedy Award, named as Time Out number one comedy show of the year); Life and Rhymes by Abandoman (Udderbelly/Edinburgh/Soho/Melbourne); The 24 Hour Plays (Old Vic); The Narcissist which Hamish co-wrote with Graham Dickson (Underbelly/Toomler Amsterdam/BAC); and Zoo by Lily Bevan (Theatre 503).

OH MY GAWD. This is one that will definitely be there for you
London Theatre Reviews

An hour of beautifully-organised, good-hearted chaos celebrating silliness, friendship and – above all – hope
Broadway Baby

Had the audience wailing with laughter.
The Skinny

Both a commentary and a greatest hits... For a reduced Shakespeare style telling of the Friends saga, this can’t be beaten
The Reviews Hub